Note: Please contact us regarding the purchase of this item or any firearm.

The Purchase of firearms will only be applicable in store.

When Tikka announced the impending arrival of its first rimfire rifle, the T1x MTR, I was excited because the brand is synonymous with quality and accuracy. The Tikka T1x MTR (Multi-Task Rimfire) is being marketed as a hunting rimfire rifle, and at first glance the rifle could easily be mistaken for one of its T3 big brothers.

The similarities to the Tikka T3x line are no coincidence, and they’re not merely cosmetic. The stock is the same synthetic stock that’s available on some of the T3x rifles, the action shares the same bedding footprint as the T3x, the trigger is the same trigger found on Tikka centerfire rifles, and the trigger plate has the same dimensions.

Basically, Tikka has engineered its rimfire to T3x specs, creating a surprisingly modular rimfire rifle with Tikka’s reputation for build quality and accuracy. The T1x MTR is available in .22 LR and .17 HMR, with twist rates of 1:16.5 and 1:9 respectively.

The barrel is a 20-inch cold-hammer-forged semi-heavy barrel that’s threaded 1/2x28 for a suppressor or other muzzle device. The advantages of a semi-heavy barrel are that it’s stiffer, helps dampen recoil and stays cooler than a thin barrel. Although rimfires don’t generate the level of felt recoil or heat of larger centerfire cartridges, these attributes still contribute to accuracy.

The semi-heavy barrel also complements the rifle’s balance. It doesn’t feel front-heavy, which pays off when shooting offhand, kneeling or sitting. I never found myself fighting the balance of the rifle in any shooting position.

One of the hallmarks of accuracy is a properly bedded rifle. Since the T1x MTR stock is the same as the T3x line, the stock has the same forward recoil lug set into the stock, mating with a recess in the action. This helps the barreled action return to the same point after recoil forces have dissipated. Because it’s designed to handle the force of a centerfire rifle cartridge, the recoil forces of a rimfire should be no match for this bedding.

A side benefit to having the same bedding footprint is the ability to transfer the T1x MTR barreled action to any of the T3x and T3 stocks that share the same trigger assembly plate dimensions. The benefit to swapping the stock of the T1x MTR with a centerfire rifle like the T3x Compact or the T3x Forest is the ability to practice fundamentals and positional shooting behind a familiar platform without the high costs of centerfire ammunition. 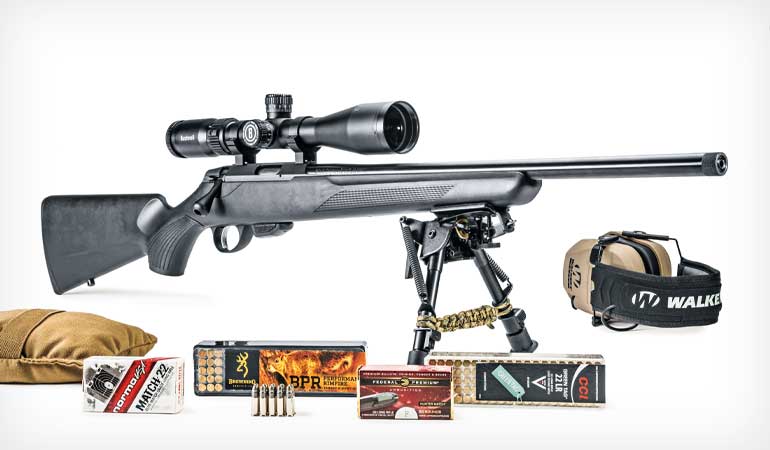 One of the ways Tikka has accomplished this interchangeability is by designing the receiver to hold the magazine box, thereby making it independent of the stock or trigger guard. The magazine box is mounted to the receiver, and the forward magazine release button is integrated within the magazine box. Swapping out the stock requires no modifications. Simply remove the action screws and mount the barreled action on another compatible stock.

The stock has a few more tricks up its sleeve. It’s an injection-molded synthetic stock with 35 percent fiberglass. Fiberglass improves rigidity and is less sensitive to temperature variations, thereby aiding accuracy. The stock also contains a foam insert in the rear to reduce noise. The stock may seem overbuilt for a rimfire hunting rifle, but I welcome the benefits because there is little to no weight penalty compared to other synthetic rimfire rifle stocks.

Another welcome feature of the stock is the flat-bottomed fore-end. Some rifle fore-end profiles are V-shaped to fill the contours of a cupped hand, but I prefer a flat bottom because it provides a more stable platform when shooting off a branch, post or other improvised rest.

Other modular features on the T1x MTR stock include the replaceable pistol grip and fore-end. There are two types of grips available for the stock: the traditional grip and a vertical pistol grip. If you prefer a wider fore-end, consider adding the beavertail fore-end. All the modular accessories are available in black, olive green, coyote brown, orange and stone gray.

The handgrip is replaced by removing one screw on the bottom of the grip. To slide the beavertail onto the stock, first remove the foregrip screw and the swivel stud.


The checkering on the pistol grip and fore-end is some of the best I’ve seen on a hunting rimfire. It’s not the typical diamond checkering but rather contoured grooves with tiny, flared, serrated scales. If you’ve ever picked up a lizard, you’ll know what this feels like. The flared scales softly dig into the hand, making for a secure hold. It doesn’t require much hand pressure to retain a firm grip, even in wet conditions.

Obviously, I think the stock has a lot going for it, but there’s a lot more. Another factor in a rifle’s accuracy is a great trigger. Here again, Tikka borrows from its centerfires and uses the same trigger mechanism. The single-stage trigger is adjustable from two to four pounds. The test rifle came dialed in at three pounds, nine ounces, and it exhibited very little creep before it broke. It was smooth and predictable.

As I mentioned, the footprint of the action is the same length as the T3x, but the bolt throw is what you’d expect from a rimfire: a short 1.5 inches. I actually wish Tikka would have designed it with an option for three-inch travel, mimicking the travel of short-action centerfire bolt actions. I know this is being highly nitpicky, but it would complete the ease of transition from one platform to another. This is a minor quibble and to me would not be a decisive factor when looking at this rifle.

The bolt is stainless steel and has a steel handle. Travel was smooth, and the ammo fed flawlessly as I ran the bolt as fast I could. When new, some bolt-action rifles need to be run hard for a while to overcome the binding spots, and eventually the bolt will wear it smooth. Not so with the T1x MTR. It was smooth right out of the box, and there were no feeding or function issues.

All the features mentioned would be insignificant if the rifle didn’t perform well. From my very first group, I knew the T1x MTR was not going to disappoint. For the accuracy test, I used a Bushnell Engage 2.5-10x44 with the Deploy MOA reticle. It features locking turrets and a total turret travel of 50 m.o.a. I chose the Engage after seeing it at a trade show. Considering its street price of $253, I was impressed by the clarity of its glass.

I mounted the scope onto the rifle’s 11mm rail using Warne 731M 30mm 7.3/22 scope rings. The scope has a parallax adjustment from 10 yards to infinity. Considering how accurately the Tikka T1x shoots, I would attach a 20-m.o.a. Picatinny rail to the top of the receiver to shoot past 150 yards and still have some elevation left to dial.

Regardless whether I loaded inexpensive hunting ammo or match ammo, it shot everything consistently well. The difference between the best-shooting ammo and the worst-shooting ammo was only 0.2 inch. Unless your life depends on shooting the wick off a candle at 50 yards, the difference between the two is insignifcant. I was curious about the combined average of all 100 shots. That group size average was an impressive 0.59 inch. This is 0.22 inch smaller than similar tests I’ve run with .22 LR rifles in a similar price range.

With the T1x MTR, Tikka shows once again that it understands that all details matter when it comes to accuracy. Everything about the rifle is well thought out, and nothing is quirky or gimmicky. The rifle feels great in the hands, the magazine is easy to seat and release, the bolt handles fast cycling superbly, and it’s highly accurate. I regretted having to return the test sample. Description: Our leather is a hand picked, tough and resistant full-grain which is beautiful, long-lasting and tanned using a traditional and natural vegetable tanning process. Full-grain leather is considered the strongest and most durable type of leather. It is designed to resist moisture and over-time look more beautiful, developing its own characteristics over the course of its life. Jekyll and...